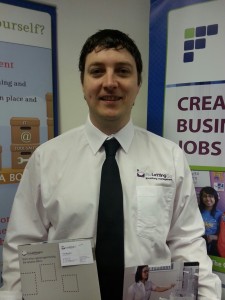 South  Manchester resident Dominic Baines had been working on an agency contract for several months and was unsure of how he could securely plan his future. Then he discovered a ‘could you work for yourself?’ leaflet from FranchisingWorks.

Dominic grasped the opportunity to attend two FREE franchising workshops. With FranchisingWorks’ guidance, he travelled across the UK to meet with franchise opportunities and extensively researched his marked territory. He used all the support tools available and worked both diligently and conscientiously. He was successful in being awarded a £10,000 investment from the FranchisingWorks Licence Fund as well as accessing support from a leading franchise bank. As such, he has been able to start his very own franchise in South Manchester with No Letting Go, a leading Inventory Management company.

“Dominic is an excellent example of what we are about, that is supporting those who are not sure in deciding on their future to consider franchising as an option. In Dominic’s case his aptitude, enthusiasm and will power has allowed him to embark on the next and probably most significant career journey to date. I very much look forward to seeing his franchise business develop.

Dominic launches his No Letting Go Inventory Management franchise in January 2015 and says:

“Once I had been to that first meeting I was hooked. From there I drove myself forward to get the franchise that I wanted. Without FranchisingWorks I wouldn’t be here today starting my new franchise for the new year. If you want to work for yourself then contact FranchisingWorks. Best thing I’ve ever done. They help you with Funding, Business plans, researching and any concerns you have.”