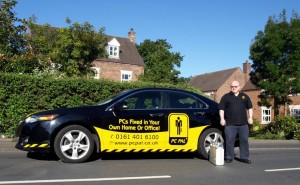 Jim Warburton is an example of how the economic recession has affected skilled professionals. Following a 15 year career as a mechanical and electrical inspector, Jim was made redundant in April/May 2011 and “tried to secure a job every day…with no real luck whatsoever.”

Jim had no option but to explore other routes for employment. He says: “when the job centre told me about a seminar to discuss the possibilities of franchising taking place
in their offices, I put my name forward to attend. I will be completely honest and say that I was extremely cautious and pretty doubtful about what I was going to hear at this meeting.”

He attended a Find Out About Franchising workshop in October 2011 and – changing his mind about franchising – his journey to self-employment began that day.

“Following a good deal of research looking into several franchise businesses, I finally decided on the PC Pal model”, he says. “This particular franchise had been vetted by several banks and lending mediums and was also endorsed by FranchisingWorks, and so gave me quite a lot of encouragement to go back into the franchise arena”.

PC Pal is a computer repair and support franchise, for which Jim now runs the territory for South Manchester. Jim received £10,000 of funding from the FranchisingWorks Licence Fund to help him to meet the finance gap to get into business. He plans to start trading in late September 2012.

“I think the programme is of great interest and offers real help to establish a new franchise and with the work situation getting worse every day, I think working self-employed (though not expecting vast wealth – you only get out what you put in), in work terms, should be there for all if at all possible.

I am really looking forward to my new career and I am intent on working as hard as I possibly can to make it work.”

FranchisingWorks is proud to have played a key role in helping Jim to secure his own employment through franchising. We wish Jim all the best as his business starts trading.