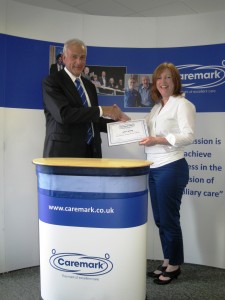 Alison Headley is the newest Caremark franchisee supporting by FranchisingWorks to get into business. After receiving advice at eight one-to-one meetings and one of our workshops, Alison and her sister are now embarking on a business that is set to employ 50-60 people in the next three years, demonstrating the power of franchising to turn people from job seekers to job creators.

A professional Careers Adviser, over the last 15 years Alison worked in various management roles in the education sector, and then moved to a post in Higher Education in a development/project management role across the Health and Social Care sector. Alison’s contract came to an end in July 2011, after which she was unemployed for six months before being referred to FranchisingWorks. By then, she says, “I had become disillusioned with the current jobs market and wanted to investigate alternative ways of making a living”.

Alison attended a Find Out About Franchising workshop in February 2012 and from there begun her journey towards becoming a franchise owner. She comments:

“[With FranchisingWorks] I gained understanding about the franchise industry, learned how to evaluate franchise opportunities I was interested in, found out about the benefits and drawbacks of franchising. The opportunity to discuss information I had obtained, review progress and ask questions of someone who had experience in franchising was invaluable. The support helped me become more confident in judging the risks and issues to consider in entering into a franchised business. I also benefited from signposting to relevant people, i.e. bank contacts, accountants etc”

Alison and her sister are due to start a Caremark franchise in Lancaster and South Lakeland, providing a high quality domiciliary care service to people who need care and choose to remain in their own homes. Alison says:

“Not having run my own business previously, I was attracted by the support offered through a franchise. The industry experience and guidance that our franchisor can offer is particularly important for us as the care sector is highly regulated – this is one of the reasons why we felt that a franchise was a better alternative to going alone. We feel that following a successful model will enable us to get established much more quickly and help us to avoid making costly mistakes. Statistics show that franchises are less likely to fail than start-ups.”

Alison and her sister were just starting their business in August this year, but said until then the most defining moment was when getting their limited company registration, and the next will be when they obtain CQC registration which will enable them to start trading.

“I expect the next year to be a big learning curve and hard work but also very exciting…I hope that by the end of the first year that we feel that we have become an established part of the local community and have made a difference both to our customers’ lives and the lives of those we employ.”

They intend to employ over 50-60 staff in the business in the next three years.