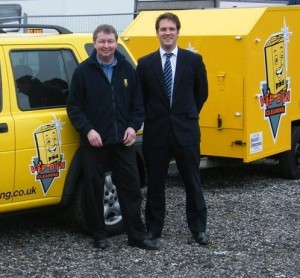 After 25 years in corporate roles, Colin Hughes, 53, became unemployed. He realised that his best chance of finding work and job security in the current economic environment would be self-employment.

“I started my own business with a partner but it could not support both of us so he bought my share of the business. After various short-term projects I found myself unemployed in November 2010. Then through the Stockport Silver Entrepreneur programme I came across the FranchisingWorks project”.

Colin says “The FranchisingWorks project was helpful in a number of ways but primarily in introducing candidates to a number of credible, pre-approved franchisors, cutting down the time needed to search through the vast choice available, and giving guidance to franchisees on how to decide which type of franchise would be best for them. It was also helpful in funding the franchise launch and making contacts with banks and other funding providers”

“FranchisingWorks helped me put together a check list of what I wanted from a franchise e.g. no long term expensive commitments e.g.  property lease, staff and other overheads, early positive cash flow, large potential customer base, good sales and marketing strategies”

The franchise Colin eventually chose was VIP Bin Cleaning Franchise, which provides a wheelie bin cleaning service to domestic and commercial customers.  Colin’s franchise is for the South Manchester territory.

“The highlight of the business so far has been the reaction from customers.  Many have told me they have been looking for a high quality and reliable service provider and are delighted VIP are now in the South Manchester area. I can already see the potential in the VIP business for me to buy another territory in the Manchester area and employ several staff in a variety of roles”

Mark Harvey, UK Managing Director of VIP Bin Cleaning, said “The successful launch of the first VIP Bin Cleaning franchise in Manchester was made possible by the sheer determination and support of several people including FranchisingWorks, Colin Hughes (the franchisee) and VIP itself. All of these people have been instrumental in making this franchise possible and we all hope and believe this will lead to many more opportunities for the people of Greater Manchester and it shows what can be achieved when people work together and believe in what they are doing”